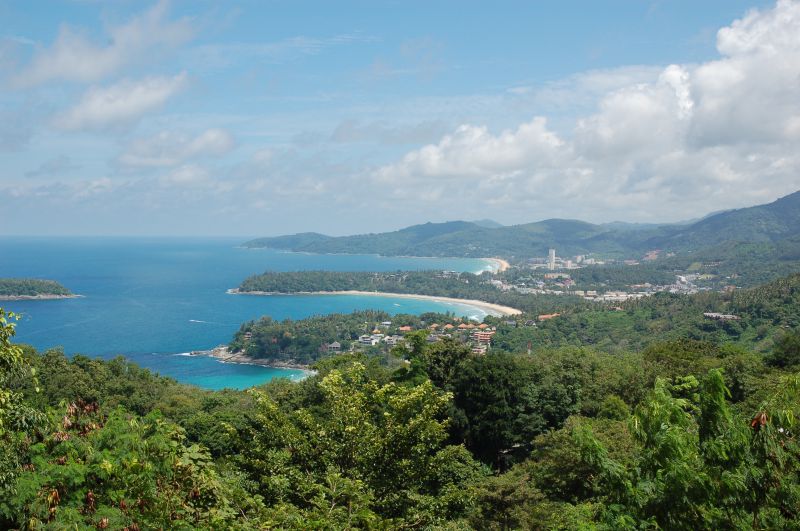 Phuket is Thailand's largest island. On the west coast there are several sandy beaches, on the east coast the beaches are usually less well-maintained and, as a result, dirty. However, near the east coast, in contrast to the west, there are many small and medium-sized islands, the beaches of which are of very high quality. Near the southernmost point of the island is Laem Promthep (Cape Brahma) - a popular place to watch the sunset. The “golden mean” between the western and eastern beaches is the island’s southernmost beach - Nai Harn, whose wide sandy strip, as well as its soft descent into the sea, have earned him the glory of one of the best beaches in Phuket (often disputed by supporters of Karon Beach) .
One of the most popular tourist areas is Patong Beach in the central part of the west coast, this beach is wide and long. Phuket's nightlife and cheap shopping are concentrated in Patong, and the area is significantly developed.
Other popular beaches are concentrated in the south of Patong. To the distance from Patong (located in the center of the west coast of the island), Karon Beach, Kata Beach, Kata Noi Beach are located to the south, and Surin, Kamala, Bang Tao, Nai Ton, Nai Yang and Mai Khao to the north. These areas are generally less developed than Patong, and are commonly used by people who want a more relaxing holiday away from the crowds.
In the south of Phuket there are several coral islands, to the northwest lie the Similan Islands, to the southeast - the islands of Phi Phi. All islands are suitable for diving.
In the east, in Pangna Bay, the islands of Yao Yai and Yao Noi are located, large in area (about a third of Phuket), inhabited mainly by Muslim fishermen and sea gypsies. On these islands, unlike Phuket, the tourist infrastructure is poorly developed, there are only a few hotels.